Lewis Hamilton led yet another Mercedes 1-2 in Barcelona today, the fifth in as many races as the Ferraris struggled to match their pace.

Despite starting in second, Hamilton was able to get ahead of his teammate through turn one after Vettel tried a move around the outside of both Mercedes.

Vettel locked up and flatspotted his tyres while Bottas backed out, leaving the Brit to pull away easily.

While Vettel got his car under control, he blocked Leclerc, allowing Red Bull’s Verstappen through, the German then fell back and eventually let Leclerc through as he had pace in hand.

The major differences at this stage were Hamilton, Bottas and Leclerc committing to a one-stop strategy but Red Bull putting Verstappen on a two-stop and an early change of tyres for Vettel giving him a second stop to make as well.

Vettel in the second half, on the medium tyre, found himself stuck behind Leclerc, eventually being let past due to team orders.

Verstappen’s second stop put him in fourth but able to catch Leclerc, looking to make a move – but a safety car came on lap 46. Pit stops reshuffled the order, putting Leclerc behind Verstappen and Vettel again. 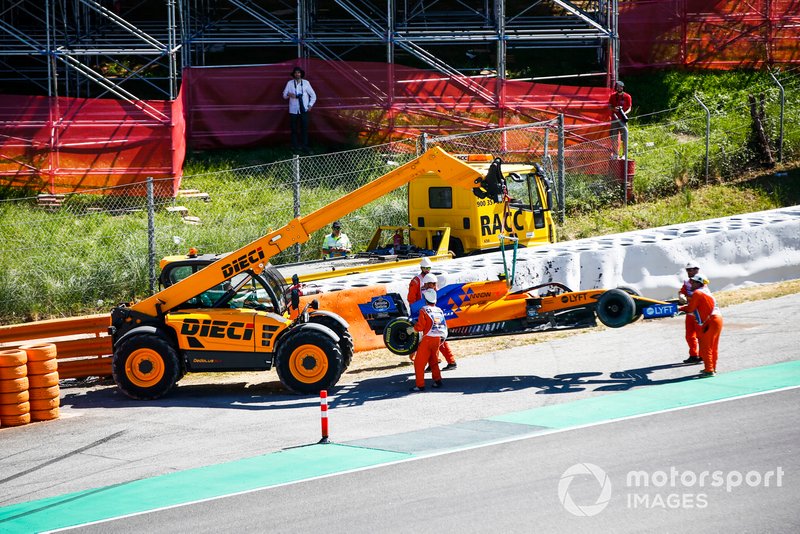 The safety car was caused by Norris passing Stroll in turn one, then a collision at turn two, where the latter turned in on the McLaren, both sustaining race ending damage.

Norris had this to say:

“I was still on the outside, I had a decent part of my car on the outside for Turn 2. But as soon as he started to turn in to the left, I could tell that he either thought that I completely backed out of it, or I disappeared, or I don’t know what.

At a point I knew he was just going to turn in and not give me enough room, I had to try and back out and do what I can but I didn’t have enough time.”

After the restart, Hamilton held off Bottas with ease and streaked away to win the race by four seconds.

Gasly attacked Leclerc after the safety car but was unable to pass, leaving him in 6th ahead of Magnussen, who had contact with his teammate, this caused the Frenchman to drop back and just about finish in the points in 10th.

Sainz secured 8th ahead of a strong drive from Kvyat in 9th, despite his team not having his tyres ready at the stop.