Valtteri Bottas placed his Mercedes on pole position today, ahead of his teammate Lewis Hamilton. This marks his third pole position for the team.

It seems that Bottas had the edge for the whole of qualifying, with the final gap being a rather large 0.634s. 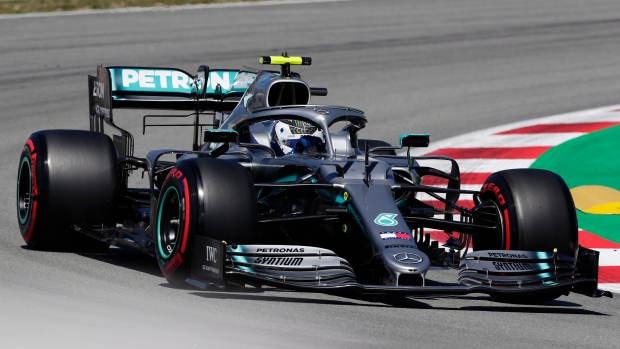 The second runs did not yield any improvement for the top four, meaning Mercedes took the front row lockout early on.

Vettel took third and ended up 0.866s, just a tenth quicker than Verstappen. Fellow Ferrari driver Leclerc could only have one run in Q3 as he had to use two sets of tyres in Q2 after running wide and picking up some floor damage. He finished ahead of Gasly but behind Verstappen.

VETTEL: "I think we got everything out of the car, but yeah… happy but not happy. The car doesn't feel bad but obviously we are not quick enough." #SpanishGP 🇪🇸 #F1 pic.twitter.com/mUMuOav2mi

Grosjean and Magnussen managed an impressive result, ending best of the rest in their upgraded Haas machinery with Kvyat close behind for Toro Rosso.

Ricciardo managed a top ten qualifying, but has a three place grid penalty for reversing into Kvyat in Baku.

Rookie Lando Norris was the first of the Q2 eliminations, ahead of Albon and Sainz.

Raikkonen ended up 14th in his Alfa Romeo, beating Sergio Perez, who ended up in a disappointing 15th.

Hulkenberg had an accident in Q1 at turn 4, losing his front wing, but managed to limp back to the pits and get it repaired within seven minutes. He came back out but could only post a time fast enough for 16th.

Stroll was eliminated for the fifth time in five races and took 17th position, ahead of Alfa’s Giovinazzi.

Russell led his teammate for the in house battle at Williams, the gap was 1.2 seconds.