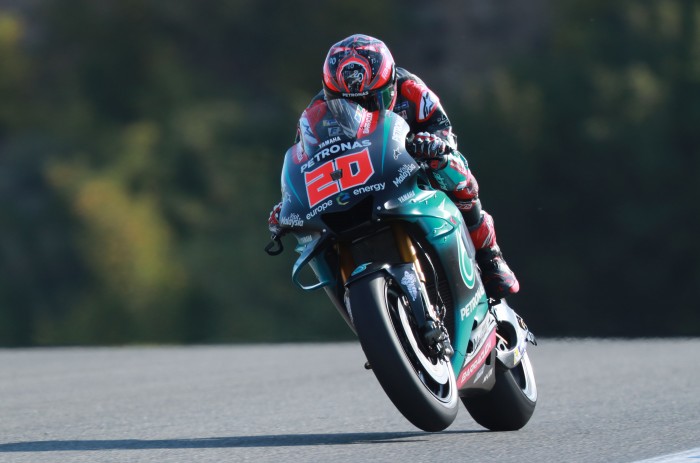 Petronas Yamaha took a shock 1-2 with Fabio Quartararo and Franco Morbidelli ahead of the Spanish Grand Prix!

Who would’ve thought it! Fabio Quartararo broke Marc Marquez’s record for the youngest pole sitter in MotoGP with a stunning 1:36.880 just under a tenth ahead of his teammate Franco Morbidelli.

Marc Marquez -who looked like he was going to take yet another pole position- could only manage third and for the first time in his MotoGP career, is the eldest rider starting on the front row! Marquez posted a 1:36.970 which is still under a tenth away from Quartararo and looking at his race pace, he is still the favourite to take victory.

"I honestly can't believe it!"

Championship leader Andrea Dovizioso managed to put his Ducati in 4th ahead of Maverick Vinales -who had to go via Q1- and Cal Crutchlow.

The third row consists of the other factory Ducati of Danilo Petrucci as well as the other LCR Honda in Takaaki Nakagami and Texas race winner Alex Rins.

This 20-year-old rookie is going to be a star 🙌 pic.twitter.com/qgAfgzd72q

Pecco Bagnaia caused a huge upset in Q1 by knocking out his mentor Valentino Rossi as well as his teammate Jack Miller. The Italian rookie then managed to put his Pramac in 10th ahead of a disappointed Jorge Lorenzo and Joan Mir.

Elsewhere, Bradley Smith managed to put his Aprillia in 19th ahead of his experienced teammate Andrea Iannone.