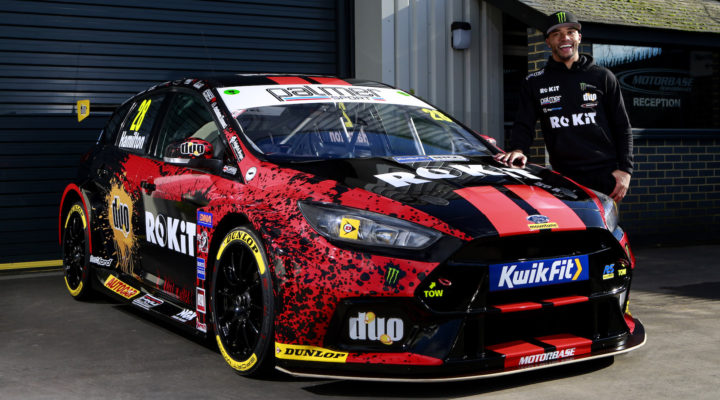 Nicolas Hamilton will return to the British Touring Car Championship in 2019 for his first full campaign in the popular tin-top series.

Hamilton will drive the ROKiT sponsored Ford Focus RS run by Motorbase Performance which will be specially modified, because of Hamilton’s struggles with cerebral palsy.

Having previously raced in 12 rounds of the Championship back in 2015 driving an Audi S3, Hamilton is now relishing the prospect of finally competing for a full 30-race season.

Hamilton told the BTCC website: “I cannot actually believe that I will be back on the BTCC grid this year. I have been in and out of different series since I started racing due to a lack of funding and general support.”

People often presume that because his older brother Lewis, is a now five-time Formula 1 World Champion that Nicolas too, has the same sort of funding and opportunities available to him. However, Nicolas admits that that’s not the case.

“A lot of people assume that due to my name, I will have all of the funding in the world, but this could not be any further from the truth,” said Hamilton. “I have been on my own for the past six years, grinding away, trying to get a full season under my belt with all of the support I need.

“I have not had a continuous career in motorsport that allows me to work on my foundation. I have just been testing at the races, doing a decent job due to my funding level and experience, but getting judged on who I am related to.”

Motorbase Performance will begin their pre-season testing schedule ahead of the 2019 Kwik Fit British Touring Car Championship later this month with a shakedown, before heading to Spain for some intensive testing ahead of the first rounds of the Championship at Brands Hatch.

Hamilton added: “I am very proud that I finally get this chance to have a full crack at motorsport and to be doing it in the BTCC, driving for a competitive outfit such as Motorbase Performance, is unbelievable. It gives me great pride in knowing that, when I sit in my car this year, I did it all off my own back and I can’t wait to get started.

“I am still very inexperienced and am just going to take it all in my stride, do as best as I can, drive like I know I can, develop my craft and see where that takes me.”

Motorbase Performance Team Principal David Bartrum added: “I’m looking forward to Nic joining us in the BTCC. He brings a different type of journey for us to go on with him. He also brings with him a steely determination, a willingness to learn and a craving to succeed.

“From what I’ve learnt of Nic so far, his approach is very professional, and I would defy anyone to spend five minutes in his company not to be inspired by him.

“We have a very good pre-season test schedule to give him time to acquaint himself with the team and his new car to give him the best chance possible.”

Hamilton joins Ollie Jackson and Tom Chilton in a three-car line up for Motorbase Performance.