Toyota have broken their Le Mans curse with a strong display from both cars. Check our our roundup of all four classes below to see how it went down at Circuit de la Sarthe.

The number 7 sister car of Mike Conway, Kamui Kobayashi and Jose Maria Lopez got off to the better start and led through the first half of the race before getting overtaken during the night by the number 8 car after Alonso’ impressive stint in which he – by his own admission – got into the rhythm of the night. 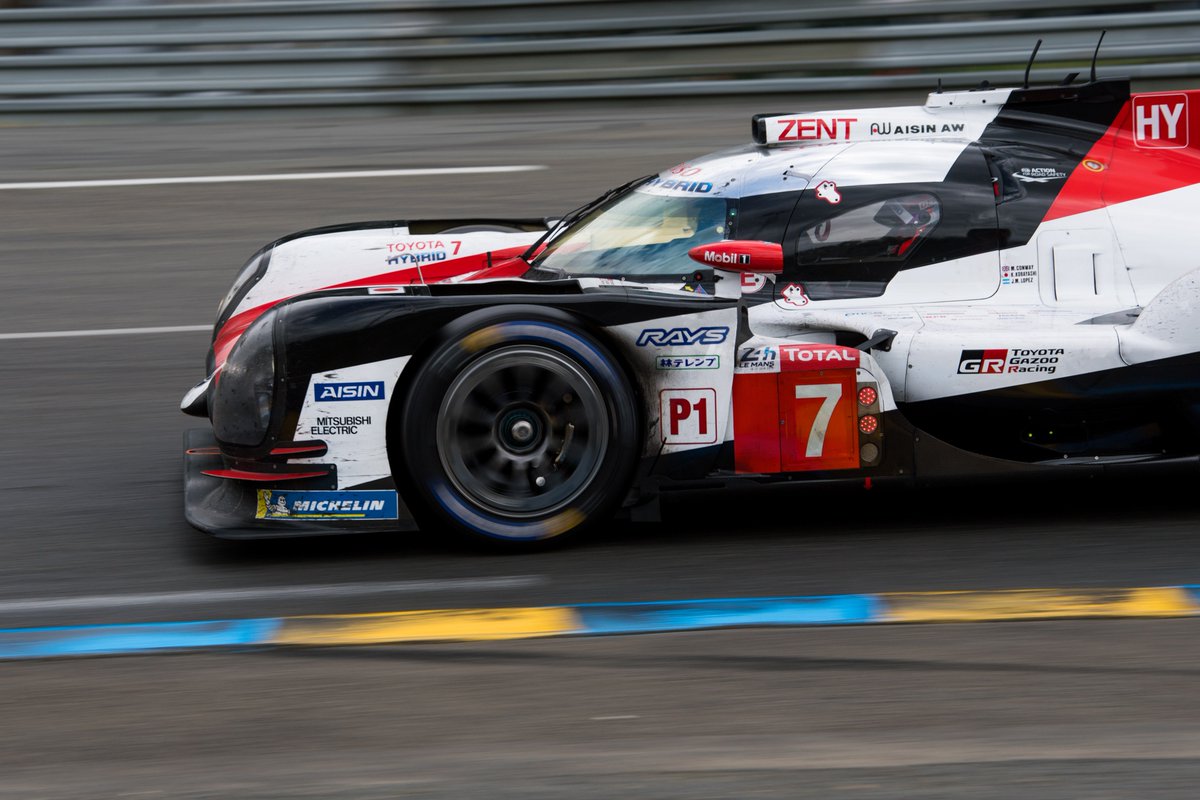 The sister Rebellion Racing car finished third being the highest placed non-hybrid LMP1, finishing twelve laps behind the winning number 8 Toyota. The sister car who many people were tipping to take the fight to the two Toyota’s finished fourth, thirteen laps behind the race winning car.

The number 7 Toyota didn’t seem to have the pace of the number 8 car and was hit with some technical issues in the final two hours of the race, eventually finishing two laps behind the number 8 car that completed 388 laps over the course of 24 hours of hard, demanding racing action. 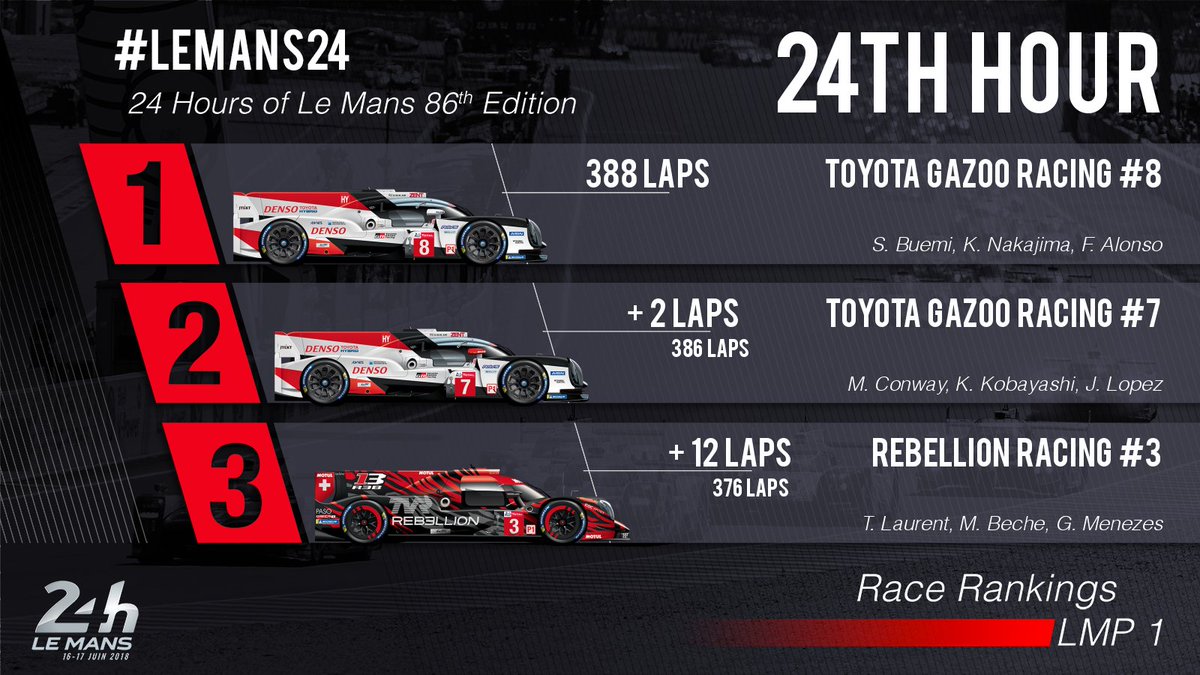 The LMP2 class was dominated by the #26 G-Drive Racing of Jean Eric Vergne, Roman Rusinov and Andrea Pizzitola

The team won the class by over two laps, leading 360 of the 369 laps they completed and finishing fifth overall. Jean-Eric Vergne described that he was told to drive like a grandmother because of the advantage they had. 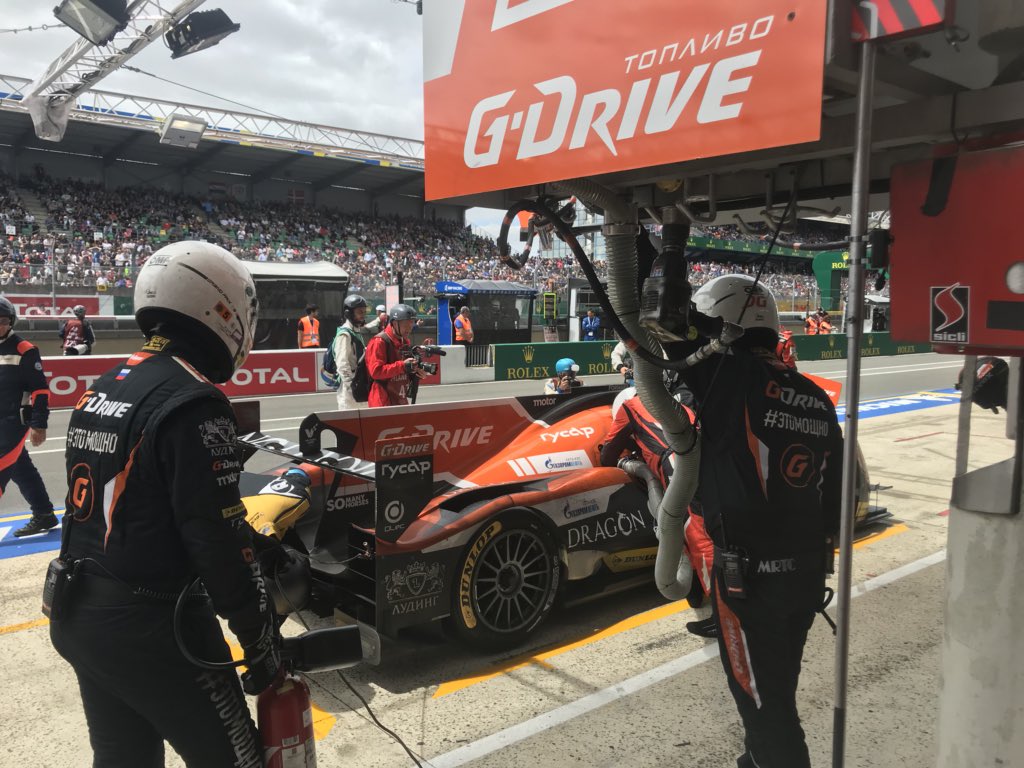 The #36 car run by Signatech Alpine finished second with the Graff-SO24 rounding out the podium. TDS Racing and former Le Mans winner Loic Duval just missed out on the podium, however beat the sole remaining United Autosport car driven by Juan Pablo Montoya, Will Owen and Hugo de Sadeleer.

Completing the overall top ten, and sixth in class was the first of the Jackie Chan DC Racing cars after the team had a shocker of a race compared to that of twelve months ago.

The DragonSpeed entry driven by Pastor Maldonado, Roberto Gonzalez and Nathanael Berthon was sandwiched by 2 Jackie Chan DC cars in eleventh as was the Racing Team Netherland car in 13th.

The #23 and #35 cars from Panis Barthez Competition and SMP Racing rounded out the main bulk of LMP2 cars in 15th and 16th overall, but eleventh and twelfth in class.

The next LMP2 car finished 22nd overall, the #47 run by Cetilar Villorba Corse which was raced most notably by ex-Sauber F1 driver Felipe Nasr. The #50 finished 35th overall and was the final LMP2 car that was classified.

The #44 Eurasia Motorsport completed more laps the #50, however as it failed to complete the final lap, it wasn’t classified.

The #48 car run by IDEC Sport retired after 312 laps, however the most notable retirement was the #22 United Autosports car, which crashed out of the race spectacularly five hours from the finish while Paul Di Resta was driving.

The Algarve Pro Racing car retired after 237 laps, however the #40 G-Drive Racing is spared the honour of being the first LMP2 car to retire by two laps. That goes to the #34 car run by Jackie Chan DC Racing, which completed 195 laps. 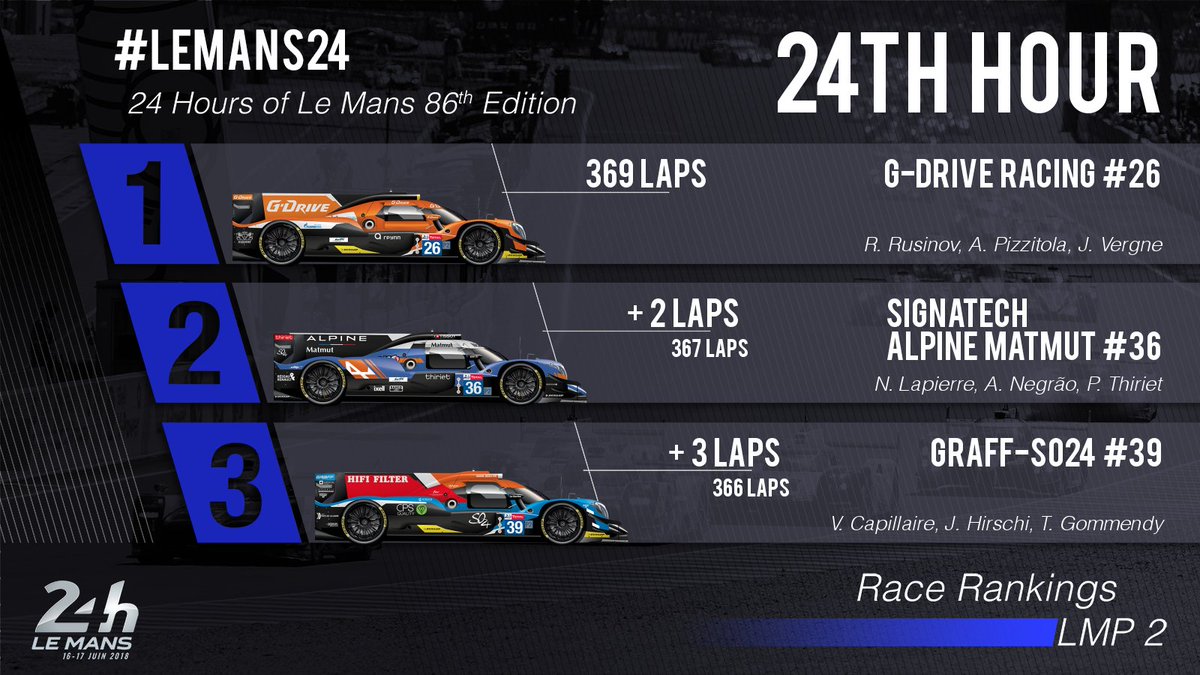 Porsche bought home a 1-2 in GTE Pro in a spectacular race ahead of Ford!

The pink #92 Porsche driven by Kevin Estre, Laurens Vanthoor and Michael Christensen dominated the race but despite the dominance, GTE Pro was the most exciting class with close racing for most of the 24 hours!

The #92 finished a lap ahead of the #91 Porsche with Fred Mackowiecki, Gianmarina Bruni and Richard Lietz which started on pole and led the first couple of hours. However, the “Pink Pig” inherited the lead in the 4th hour and it stayed there to deservedly take the win!

Behind the Porsche’s were Ford with the #68 of Joey Hand, Dirk Muller and Sebastien Bourdais continuing the American outfits streak of podiums at Le Mans ahead of their sister #67 piloted by Andy Priaulx, Harry Tincknell and Tony Kanaan.

Chevrolet bought home their #63 in 5th position but the sister #64 had to retire on the 18th hour. Another manufacturer who had to bring home only one car was the returning BMW who struggled after the #82 retired on the 15th hour and the #81 finished in 12th.

Aston Martin had an uneventful Le Mans which will disappoint Aston Martin more after they won it last year and they bought a new Vantage to Le Mans. The #95 “Dane Train” of Marco Sorensen, Nicki Thiim and Darren Turner finished the highest of the Aston’s in 9th.

Ferrari also struggled this year at Le Mans with their 488 GTE but did better than Aston Martin with the #52 and #51 finishing 6th and 8th respectively. They had much better luck in GTE Am though… 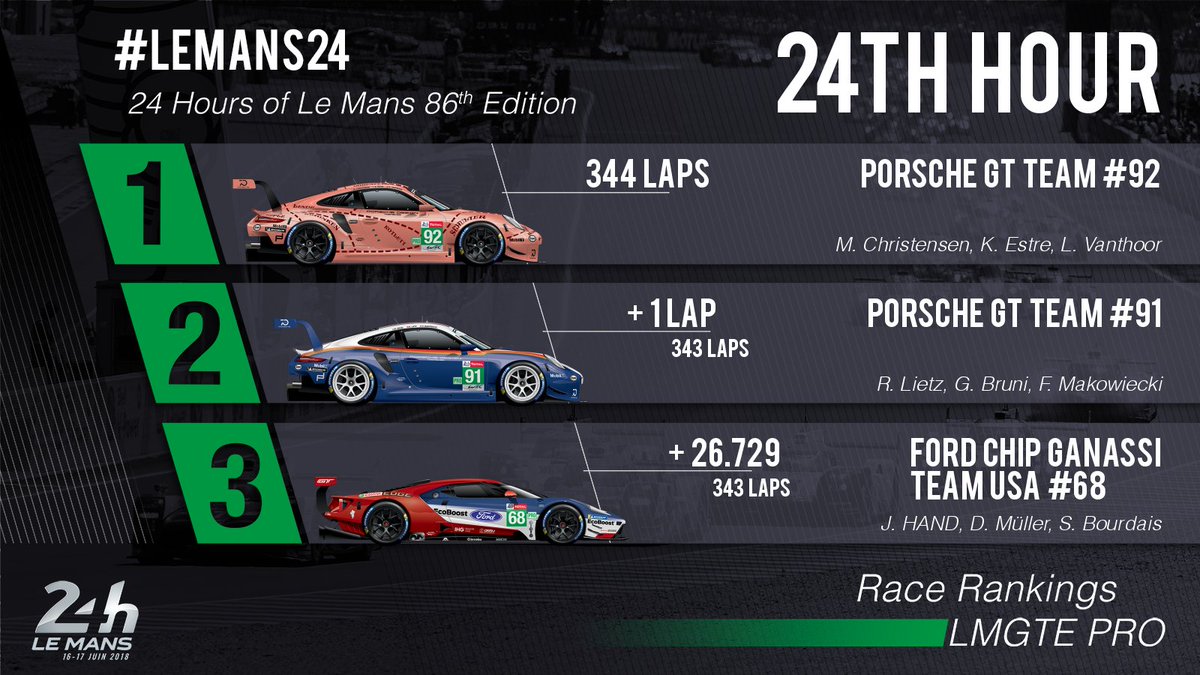 The number 77 car piloted by Matt Campbell, Chhristian Reid and Julien Andlauer took the lead after three hours and were hardly troubled for the rest of the race.

Campbell and Andlauer were race rookies, with the former given the job of bringing the 911 RSR home, ahead of the #54 Spirit of Race Ferrari of Flohr, Castellacci and Fisichella.

Despite the #85 Keating Motorsports Ferrari looking like it was going to take the second spot, Ben Keating beached the car at Mulsanne corner and fell to third. Jeroen Bleekemolen cost the team some time with this off track excursion:

Fourth place was taken by the #99 Proton Competition Porsche with an all-American driver lineup, ahead of the #84 JMW Motorsport Ferrari in fifth, despite losing two whole laps with a gravel trip.

One of the shocks early in the race was the #86 Gulf Racing Porsche, which was leading, a slow puncture early on and a crash in hour two meant long repairs and fell to a class 11th.

Paul Dalla Lana was retired shortly after midnight after a crash at the Porsche curves.

the #88 Dempsey-Proton Porsche retired after hour 18 after a mechanical issue caused a crash. 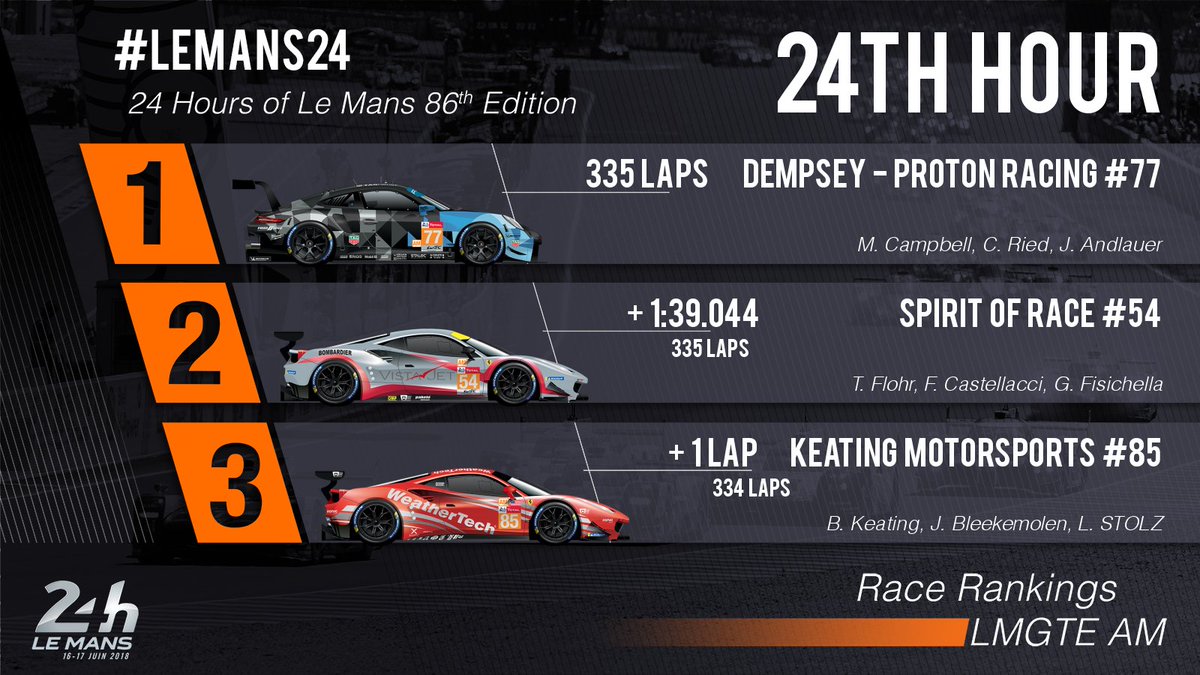